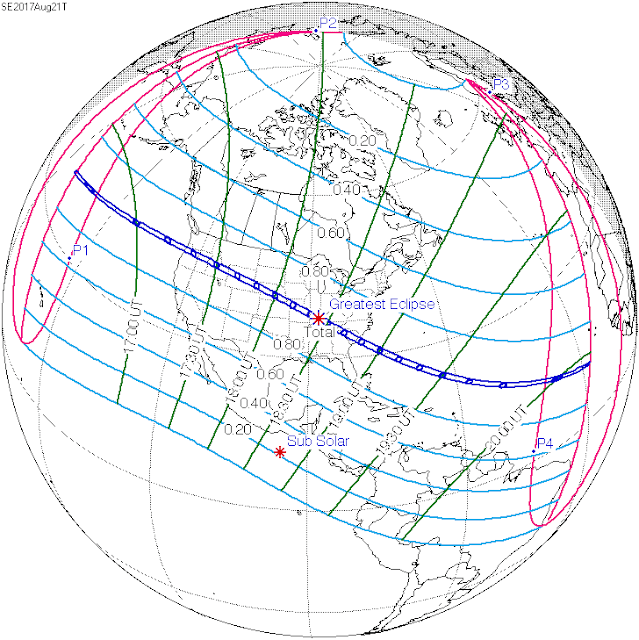 On Monday, August 21, 2017, a total solar eclipse will be visible within a band across the entire contiguous United States. This eclipse will only be visible in other countries as a partial eclipse.
A solar eclipse occurs when the Moon passes between Earth and the Sun, thereby totally or partly obscuring the image of the sun for a viewer on Earth. A total solar eclipse occurs when the moon's apparent diameter is larger than the sun's, blocking all direct sunlight, turning day into darkness. Totality occurs in a narrow path across Earth's surface, with the partial solar eclipse visible over a surrounding region thousands of kilometers wide.
The last time a total solar eclipse was visible across the entire contiguous United States was during the June 8, 1918 eclipse, and not since the February 1979 eclipse has a total eclipse been visible from anywhere in the mainland United States. The path of totality will touch 14 states, although a partial eclipse will be visible in all fifty states.
The total area of the path of totality will be about 16% of the area of the United States, although most of this area is over the ocean and not actually over the United States. The event will touch land on the Oregon coast as a partial eclipse at 9:06 a.m. PDT on August 21, and will end later that day as a partial eclipse along the South Carolina coast at about 4:06 p.m. EDT.
There are expected to be logistical problems with the influx of visitors, especially for smaller communities. There have also been problems with counterfeit eclipse glasses being sold.
Future total solar eclipses will cross the United States in April 2024 (12 states) and August 2045 (10 states), and annular solar eclipses—meaning the apparent size of the Moon is smaller than that of the Sun—will occur in October 2023 (9 states) and June 2048 (9 states).
From Wikipedia, the free encyclopedia