The History of Saint Patrick - a Short Story

I made this for St. Patrick's day. Most of you probably imagine a Leprechaun or clovers when you hear of St. Patrick. Who is this man, and why do we celebrate him? I accidentally put in the wrong date for when St. Patrick was born. I blame that on staying up for 36 hours to finish the video. :-P

St. Patrick was born, not in Ireland, but in Britian around AD 35. Well, actually, he wasn't called St. Patrick at the time, or even Patrick, but was referred to as Maewyn Succat. Good thing he changed his name later, St. Maewyn's Day doesn't have the same ring. We'll stick with Patrick just in case I'm slaughtering that pronunciation.

Patrick was quite far from being a saint growing up. Until he was 16 he considered a pagan, or maybe even an atheist by today's definition. It was at that age when he was taken into slavery by a group of Irish marauders that attacked his village.

Patrick was sold to his master, a Druid chief in Ireland, and served him for 6 years. It was during his captivity that he became a Christian. One day he heard what he described as a voice compelling him in his sleep to leave his master, and find a ship that awaited him. He fled to the coast of Ireland, and eventually made it back to his home. He then decided to study in the monastery, and stayed there for 12 years, during which he decided that his calling was to convert the pagans to Christianity.

Eventually he adopted his Christian name, Patricius, or Patrick as we know it, and returned to Ireland after being appointed a Bishop. Patrick was very successful at winning converts, which upset the Celtic Druids who had him arrested several times, but he managed to escape each arrest. Patrick traveled through Ireland, establishing monasteries, schools, and churches throughout the land.

Eventually Patrick returned to where he had once been a slave, to pay his ransom to his former master, and to impart his "blessing" upon him. Despite being treated cruelly, Patrick didn't hold a grudge against him.

As Patrick approached his master's old homestead he saw that it was in flames. He found out that
the stories people told about him had proceeded him, and in a fit of frenzy, his old master gathered all his treasures into his mansion, set them on fire, and threw himself into the flames. An ancient record ads that "his pride could not endure the thought of being vanquished by his former slave".

There are a lot of legends surrounding St. Patrick. Some say that he raised people the from the dead. Others say that he drove the snakes out of Ireland, but since there are no fossil records of snakes in Ireland at that time, it is highly unlikely, unless he drove out the fossils as well. Many think that "snakes" was a metaphor for the conversion of the pagans, meaning he drove paganism out from Ireland.

Green wasn't the original color associated with St. Patrick, it was first blue. It eventually changes for various reasons, probably because of being used in various Irish flags, and how green is associated with Ireland itself.

Patrick worked in Ireland for 30 years. Afterwords, he retired, and then died on March 17th, in AD 461. There wasn't a canonization process when Patrick died, that didn't come until the 12th century. He would have been declared a saint by acclamation, and his sainthood approved by a local bishop soon after he died.

St. Patrick's Day was originally a Catholic holiday, and still is, but has also evolved into a secular holiday, being celebrated by non-Irish, non-Catholics, and ironically enough, even atheists.

The tradition of pinching people that didn't wear green is an American tradition that started in the 1700s. People thought wearing green made them invisible to leprechauns, who they thought would pinch people for not wearing green. The pinching served as a reminder to those who were green-abstainers.

Today when people think of St. Patrick, they imagine a leprecauhn in a green jacket, hat, pipe, clover, and pot of gold. Not a man who devoted 30 years of his life to teaching and helping the Irish. Hopefully you now know a little more about the history of St. Patrick. 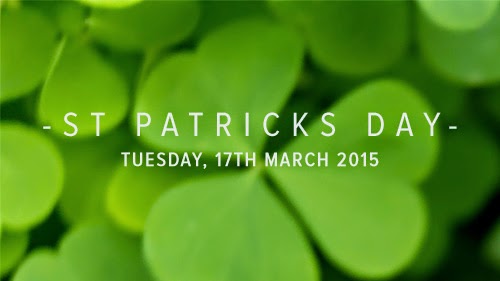