AzM BLOG: #COMICS (Superheroes) "The Rise of Superheroes and Their Impact On Pop Culture" - The Smithsonian


New from Stan Lee, Michael Uslan and the Smithsonian - take this course for free on edX:https://www.edx.org/course/rise-super...

The Rise of Superheroes and Their Impact On Pop Culture


EXCLUSIVE! When you complete a verified certificate in this course it will feature original artwork with both Stan Lee’s and Michael Uslan’s signature.

Join the Smithsonian, and comic book industry legend Stan Lee, to explore the history of the comic book and the rise of superheroes.

The ancient gods of Egyptian, Greek and Roman myths still exist, but today, they have superpowers, human foibles, and secret identities. They come from comic books and graphic novels and have taken over pop culture on the stage, screen, video games, and animation.

From Superman® and Spiderman®, to The Avengers® and The Hulk® and beyond, who are these heroes? And, how have they evolved from folklore and myth, across all cultures and religions?

Learn from Smithsonian and industry experts including Stan Lee, who created the modern superhero template. His early comics featuring Spiderman, Iron Man®, The Hulk, Thor®, and The Avengers led Marvel to success. He continues to reinvent himself to create modern global superheroes and appear in cameos in superhero films and TV, such as Avengers: Age of Ultron. Michael Uslan, executive producer of top grossing, award winning movies, including The Dark Knight series, Lego® Movie, the animated Batman films and Batman® VS Superman.

In this course, we explore the following questions:

Why did superheroes first arise in 1938 and experience what we refer to as their “Golden Age” during World War II?

Why did the superhero genre ebb and flow in popularity over the decades?

How have comic books, published weekly since the mid-1930’s, mirrored a changing American society, reflecting our mores, slang, fads, biases and prejudices?

Why was the comic book industry nearly shut down in the McCarthy Era of the 1950’s?

How did our superheroes become super-villains in the eyes of the government, clergy, educators, and parents of the mid-20th Century?

When and how did comic books become acceptable again, and eventually become valid teaching tools in universities and schools?

When and how did comic book artwork become accepted as a true American art form as indigenous to this country as jazz?

Finally, when and how did comic books become “cool” and the basis for blockbuster movies, hit TV series, top-selling video games, and acclaimed animation, while also impacting fashion and style- and even the moral and ethical codes of children- around the globe? 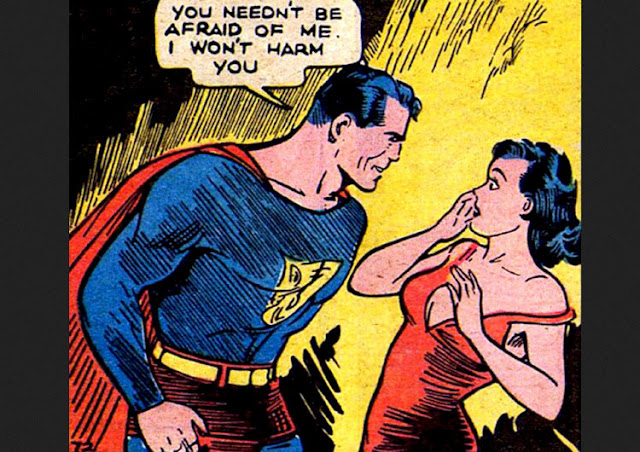