Cyborg insect research led by engineers at UC Berkeley and Singapore’s Nanyang Technological University (NTU) is enabling new revelations about a muscle used by beetles for finely graded turns.
By strapping tiny computers and wireless radios onto the backs of giant flower beetles and recording neuromuscular data as the bugs flew untethered, scientists determined that a muscle known for controlling the folding of wings was also critical to steering. The researchers then used that information to improve the precision of the beetles’ remote-controlled turns.
This study, published in the journal Current Biology, showcases the potential of wireless sensors in biological research. Research in this field could also lead to applications such as tools to aid search-and-rescue operations in areas too dangerous for humans.
Video courtesy of Hirotaka Sato/NTU Singapore 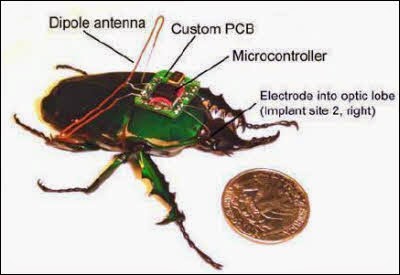