(W) Joe Benitez
(A) Joe Benitez, Peter Steigerwald
(Cover) Joe Benitez, Kenneth Rocafort
The mystery continues in this brand new issue! Lady Mechanika's investigation of the mechanical corpse leads her to Lord Blackpool, a weapons dealer with whom she's had a prior disagreeable altercation. When she learns that the grand scientific symposium Mechani-Con is holding its annual Masquerade Ball aboard Blackpool's new behemoth airship, she devises a plan to sneak on board and search for clues but finds that she isn't the only uninvited guest.


Lady Mechanika is a creator-owned comic book series by Joe Benitez, inspired by the steampunk genre. “Steampunk” is all about re-imagining history, usually combining the elegance of the Victorian Era with more advanced science fiction technology.
The tabloids dubbed her “Lady Mechanika“, the sole survivor of a serial killer’s three-year rampage through England. Authorities found her locked in an abandoned laboratory amidst an undeterminable number of corpses and body parts, her own limbs having been amputated and replaced with mechanical components.
With no memory of her captivity or her former life, Mechanika eventually built a new life for herself as a private detective, using her unique abilities to solve cases the police couldn’t or wouldn’t handle. But she never stopped searching for the answers to her own past.
Set in turn of the century England, a time when magic and superstition clashed with new scientific discoveries and inventions, Lady Mechanika is about a young woman’s search for her own identity as she solves other mysteries involving science and the supernatural. 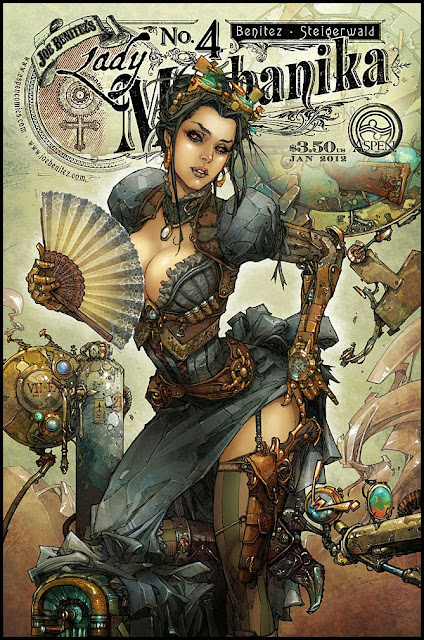